Geezers vs The Bembel Cup

​In Frankfurt 10 more of us awoke in our amazingly comfy hotel beds (great choice Jen!), to a beautiful day that threatened to be hot, but in the end we took to the sunshine quite well! We were also lucky to have Geezer-friendly ref assistance with Matt Boesen, Jordi and Ania joining us, not to mention Irene and Pati as player refs. I really think bringing great referees along to a tournament shines well on a club, perhaps we could dress them in Geezer-Gold referee kit... bias doesn't exist in touch refereeing, just great decision making!

It was a late start for us facing the dutch Fluffy Dragons in our first game - thanks to a serious warm up on the neighbouring sand surface, with coach-player-guru Nick, we started smoothly and had the first score, but they run with some amazing combinations and they soon had us back-pedalling and were able with slick skills to get over our line repeatedly. We managed 2 touchdowns to their 8, at the cost of much of Matt's skin left on the scoreline, but it was a good wake up.
Game two against Strasbourg was an important one in our pool of 5 teams, and we actually had it in hand up at 2-3 in the second half. Somehow the french passion got to us late in the game and a last minute score running around tired defenders saw us sadly lose by 1.
What caught us slightly off guard was the arrival of our lunchtime break so soon in the day - the price of a 10:30am start I guess. Geezer teams don't traditionally perform the best after a pasta powered lunch break but we had enough focus this time to take a good win over Frankfurt's 2nd team The Geese (name confusion anyone?).
With three games down our combinations were starting to work well, prominent for me especially the driving to the box getting us there in 2 touches every time (OK shortish fields help), and our style of hard running on attack was flowing more and more.
So for our last pool game we faced a Munich team, who had combined with Hamburg and other players including Baden's Anna - they played hard but we were confident and made it a solid win.

It was then straight into the playoffs, only a 10 minute break before facing the youth and fire of Luxembourg. A bit of patience was necessary but the scores soon came, especially Lukas scoring 3 in great style, and Nick finding his mojo and making use of some diving accessories. We all had to defend hard against bendy sidesteps and coming with 6 ladies was starting to reap rewards with Irene, Jess and Jen working hard to help in the middle (Irene helping the referees with their calls too!). Pati Dannie and Cat as our ever patient and energized wingers were super solid all day - the skill sets of some of us in the middle mean you were getting far less ball than I would have liked, we certainly have work to do there.

Our 6th and final game, was playing off for 5th place against Frankfurt's first team. One of the things I was desperate to get from the day was a hard and meaningful final game, and it was quite a match. They have serious players in the middle who forced us to defend tight and fast, with a number of really good defensive sets we were holding them out. Thanks also to Jen's scream as an attacker stepped on her toe, that was loud enough to stop the entire attack flow (and possibly the game on the other pitch too).  Down at the other end it was a delight to setup a score using the play we had run 59 times in our warm up 7 hours earlier.
We couldn't stop fast passes from leading to scores the whole game and as the hooter went it was 3-3 and so straight into a dropoff, our ball. Sudden death means you need patience, ruthlessness, and no errors. We had two chances to score but it didn't come together and a not-straight call meant we were back on defence - Frankfurt were patient and knew exactly what they were doing as they drove to our line, a step-back and offload into a hole saw them through and Geezers going home with Sixth place.

In the final was a talented Lakers outfit against the Fluffy Dragons, a real tug of war with fantastic ball skills on both sides leading to lots of touchdowns, I think 6-6 at the hooter. The dropoff went to the Fluffy Dragons, congrats to them on a great full day's performance.

When all the touch has been played, the weekend is only halfway through - Frankfurt's organisation was so onto it they had us doing shots before everyone had even showered. And what followed was quite possibly the best after-touch meal ever (according to more than just myself!) - a high quality Thai food buffet at the fields, in the evening sunshine, with massive helpings for hungry touch players. Sorry to those who had to escape early back to families and friends!

At this point in the weekend we can't report everything in detail, but well-fueled Geezers made it to the after party on time, most of us in bizarre colour combinations thanks to the Rubix Cube theme. There it was once again a full team effort that lead to 3 Geezers outlasting all other teams and 'winning' the after party, alongside a Berlin 'Pampelmuse'.

The rewards of an amazing, hard day of touch are truly felt on the Sunday when you reunite with your team mates. and hear the stories of pain and fatigue, the grazes and strains and badges of honour earned running alongside each other the day (and night) before. And it all makes the traditional KFC visit taste even better.

To finish it has to be said, as it has been said before - I feel so privileged to have these weekends with the Geezers and can't wait for the next one! 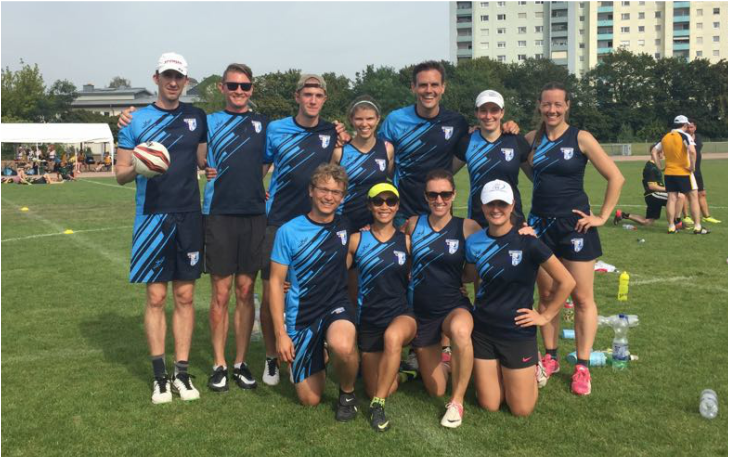